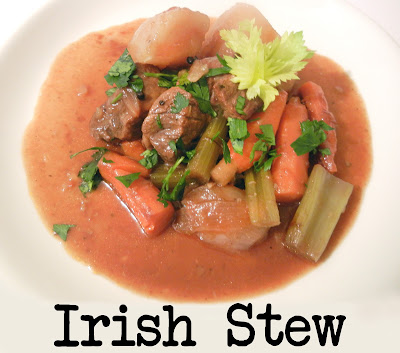 St. Patrick's Day is coming up, so I just couldn't resist the temptation to post the typical cliché for the holiday: Irish Stew. I'm half Irish after all, so I had to take this dish on eventually. About 10 years ago, I spent a year in Ireland and a couple of times when I had stew there it was served on a plate rather than a bowl. I liked eating it that way because it made this already hearty dish feel extra substantial. I use large chunks of beef and potatoes that are simply cut in half. That way, after cooking the stew for a couple hours in a dutch oven, by the time the meat is tender and melting and the potatoes are cooked just right. Because this is for St. Patrick's Day, naturally the broth is made with Guinness extra stout. 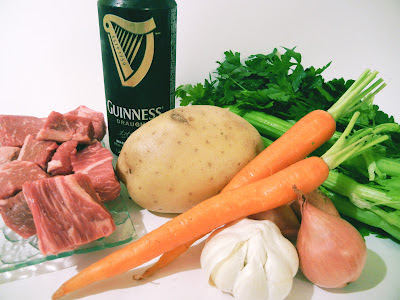 Preheat the oven to 375F 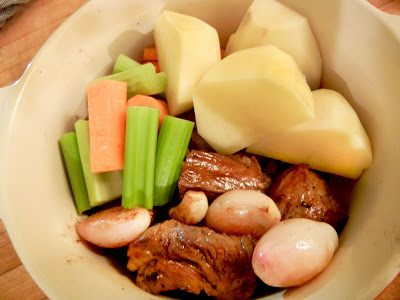 2. Fry the onions and garlic cloves until brown and then add to the pot. Add all of the remaining ingredients except for the parsley and celery leaves. Add water until all the meat and vegetables are covered. Season with salt and pepper. Cover and cook in the oven at 350F until the meat in very tender, about 2 hours.

To serve: Use a slotted spoon or ladle to divide the meat and vegetable among 4 plates. Pour over the broth and then garnish with parsley and celery leaves. For a thicker broth, mix 1 tbs cornstarch with 2 tbs water and then add to the broth and let simmer for 5 minutes before serving. 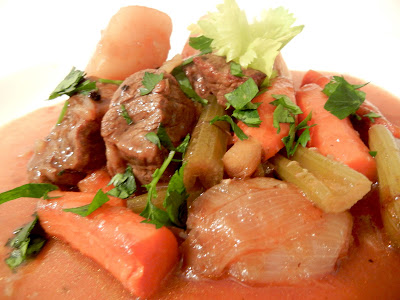