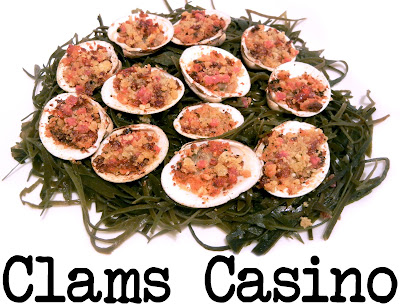 Clams Casino is an old American classic. I absolutely love that other American baked shellfish classic, Oysters Rockefeller, and this dish is just as tasty.
I got the idea to make this dish based on what I happened to have in my fridge that day. I had some clams leftover from when I made Pompano a la nage and some handmade salami that I picked up at a local Italian deli. Clams casino is usually made with bacon, but I knew that the homemade salami would go really well with clams. Like many old classics, there are a lot of different variations of the dish. A lot of recipes call for red peppers. I decided to use sun-dried tomatoes for a little extra tartness. A healthy amount of garlic and a good dose of butter make the clams really sing.
To open the clams, I give them a quick steam before stuffing them. Although, if you are feeling patient and are good with a clam knife, it is worth the extra effort to open them by hand. The clams will be extra tender if they are raw when you bake them. The things is, it takes a long time to open each clam by hand, whereas they'll all pop open with zero effort if you steam them. I opted to steam them, so I certainly won't hold it against you if you do to. 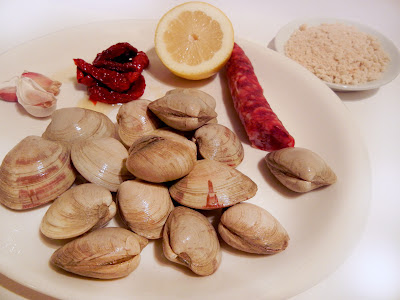 1. To open the clams, put 100ml white wine in the bottom of a pot and bring to a slow boil. Put the clams in a strainer above the pot and cover. Steam the clams until they are all open, about 8 minutes. Check the pot occasionally to make sure the wine isn't boiling too rapidly or it could all evaporate. If the level gets too low, add a bit of water. 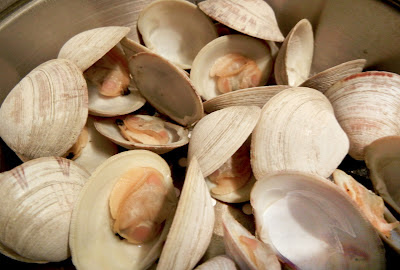 2. Combine all the remaining ingredients in a mixing bowl and stir well. 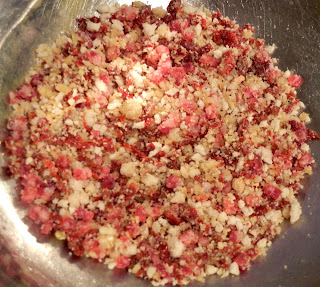 3. Remove the top shell from all the clams and then use a knife to separate the clam from the bottom shell. Place a spoonful of stuffing in each clam and then pack it down. Lay the clams on a baking tray. Broil with clams on the middle rack until the bread crumbs have browned, about 3 - 5 minutes. 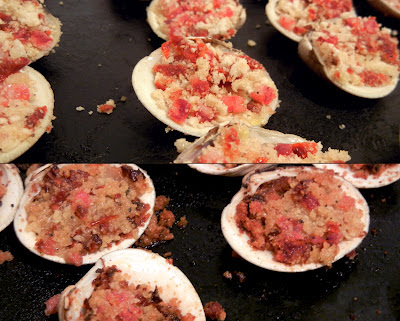 *You can use a layer of course salt mixed with a bit of water to steady the clams when baking them, but unlike oysters, I find you don't really need to with clams.   The clams will need something to steady them when you serve them though. For this you can use coarse salt, but instead I like to use a bed of seaweed. I find it looks nice, and the aroma of the seaweed reminds me of the sea as I eat the clams. Inexpensive packets of dried seaweed can be found at most Asian markets.  Soak the dried seaweed in cold water for about 10 minutes, strain, and then pat them dry with a towel. 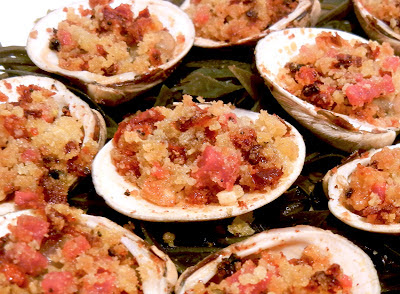