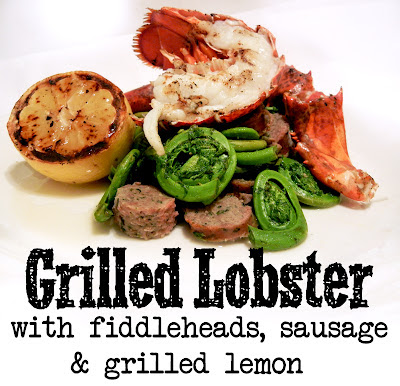 This is a great little dish that really takes advantage of seasonal ingredients. I adore fiddleheads, so when they start appearing in markets I make sure to grab them while I can. Fiddleheads are the tips of young ferns and can only be harvested in the spring, so once they are gone, they're gone. The season for fiddleheads is incredibly short, so if you see them, grab them right away!  They have a wonderful green vegetable flavour similar to asparagus or rapini, but they also have a certain, hard to explain, tanginess that is completely unique.
Be careful when working with fiddleheads, because the raw plant contains toxins that can be bad for you. Soak your fiddleheads in cold water for a least one hour before cooking. Also, you should blanch the fiddleheads twice, straining the water and starting with fresh water each time. If you can't find fiddleheads, rapini (broccoli rabe) is a good substitute for this recipe.
We are also in the middle of lobster season right now, so I'll be posting another lobster recipe next week. Because the warm weather is now here, I decided to grill the lobster to go with my fiddleheads. Usually though, grilling is not my favorite way to cook lobster, because it is so easy to overcook it on the grill. It's a damn shame to take such an amazing ingredient and then ruin it by cooking it until it's dry and chewy. You can prevent that by following a few simple guidelines to avoid overcooking your lobster. 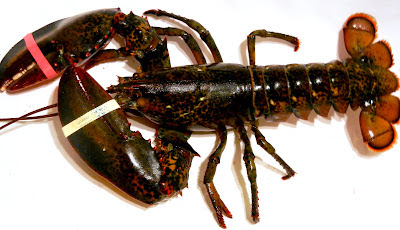 First of all, you will have to buy live lobsters. Precooked lobsters will dry out the moment you put them on the grill. If you can, get bigger lobsters (2lbs+) because they will take longer to cook and are more forgiving. Big lobsters can be hard to find and/or expensive, so don't worry too much if yours are closer to 1 lbs. When it's time to cook your lobsters, bring a large pot of water to just under a boil and cook them for 3 minutes - just long enough to kill the lobsters. Transfer the par-boiled lobsters to ice water to stop the cooking. Then, while you crack the shells of the lobsters, pre-heat you barbeque as hot as you can get it, so that you can quickly get a nice char on your lobster without overcooking it.
One final note on the choice of sausage for this dish. Pretty much any sausage will do. I like to use a garlic sausage because garlic and lobster is obviously a great match. Toulouse sausage would be a good choice. I found some game sausage (boar, duck & venison) that was garlicky and herbaceous and worked really well with the lobster. 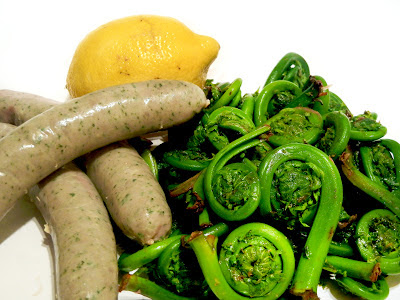 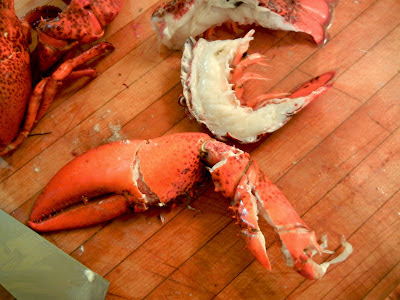 2. Bring a pot of water large enough to fit the lobsters to a gentle boil and then cook the lobsters for 3 minutes, then transfer to a large bowl of ice water. Remove the tails and then use a knife to split them down the center. Remove the claws and use the back of the knife to crack open the claw. Hit the claw at the top, followed by the bottom and then once more in the center to crack the shell evenly in two. Finally, cut a slit in each part of the "knuckles" attached to the claw. 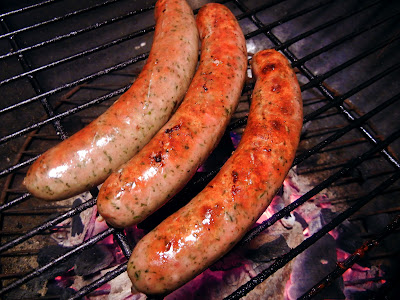 3. Preheat the grill to high heat. Poach the sausages in boiling water for 5 minutes and then transfer to the grill. Cook until browned on all sides. Place the lobster on the grill with the tails meat side down. Cook 5 minutes for a 1 1/4 lbs lobster, 8-12 minutes for larger lobsters. Cut two lemons in half and brown on the grill. 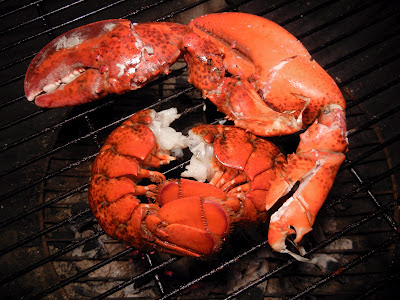 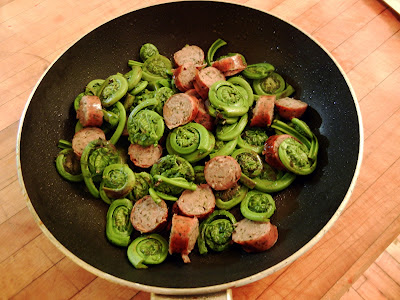 To serve: Divide the fiddleheads and sausage among 4 plates. Place one claw, half a tail and a piece of grilled lemon on each plate. 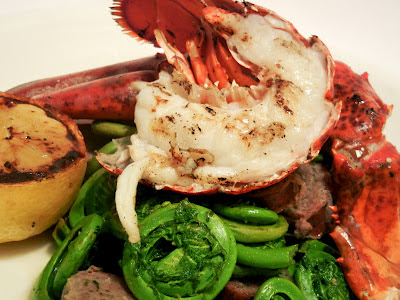