Brussels sprouts with almonds and bacon 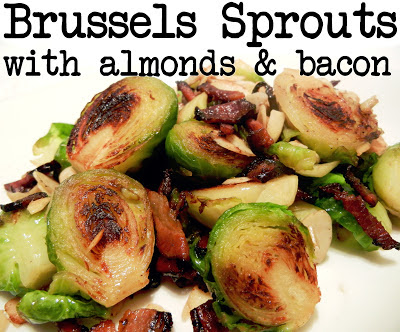 Poor, misunderstood brussles sprouts. They are the cartoon characture of foods kids hate. There's also no shortage adults who refuse to eat them. I can understand why most kids hate brussels sprouts because they have a strong flavour with a bitter edge to them. To me that bitter, punchy edge is exactly what gives them their adult appeal. I also get why plenty of adults have an aversion to brussels sprouts aswell. If they are cooked wrong, they can be pretty offensive. Brussels sprouts that have been maliciously overcooked in pot of boiling water will become a mushy, stinky mess. Cooked just right, with a generous amount of butter - or even better bacon - those brussels sprouts will sing.

Because brussels sprouts have such a naturally strong flavour, they can hold up to some heavy handed garnishing. That's why I like to load mine with lots of toasted almonds & bacon, along with some Tabasco and Montreal steak spice. I also like to brown the brussles sprouts in the bacon fat until they are almost burnt, to get a wicked roasted flavour. Try this recipe for family at Christmas and you are sure to have a couple of brussels sprouts coverts, kids and adults alike. 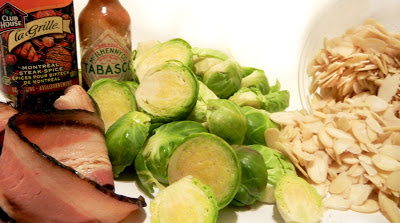 
1. Bring a large pot of salted water to a rolling boil. Prepare a bowl of ice water to cool the sprouts after cooking. Cook the sprouts in the boiling water for 4 minutes and then strain and transfer to the ice bath.

2. Place the chopped bacon in a cold frying pan and then place on medium-high heat. Once the bacon gives off a bunch of fat and starts to brown, add the brussels sprouts. Spread the sprouts evenly & stir occasionally until they start to brown. For best results, I suggest using two large frying pans side by side, to increase the amount of surface area where the sprouts touch the pan directly. This helps the browning process and will boost the rich nutty flavour of your sauteed brussel sprouts.

3. Once the brussel sprouts have browned, add the shaved almonds and continue sautéeing until they too have brown. The nuts will toast quickly so be careful not to let them burn.

4. Season the brussels sprouts with Montreal steak spice & a few drops of tabasco. 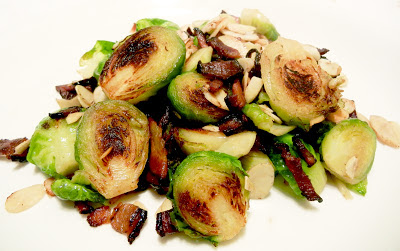