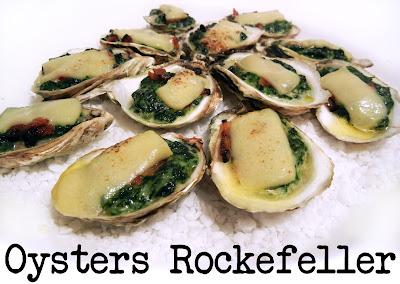 I am a true oyster aficionado. I adore their salty, briny ocean flavor. I also love the whole sub-culture that is built around this humble little bivalve. Over the years I've gone to a few oyster festivals & shucking competitions and let me tell you they are a freakin' ball. The people who devote their lives to this mollusk - be they farmers or professional shuckers - tend to be intense individuals with a real passion for what they do. Most oyster enthusiasts will tell you that the only way to eat them is raw, with maybe a little bit of lemon or mignonette, but I beg to differ. Yes, I love eating oysters naked & raw, but sometimes I like to dress them up a bit.

There's lots of fun ways to serve oysters hot and this is for sure my favorite. Oysters Rockefeller is about as old-school as an American recipe gets. They were invented at Antoine's restaurant in New Orleans in 1899. Wikipeadia has a great article about this dish's illustrious/mysterious background if your feel inclined to learn about a piece of North American culinary history.

My personal recipe for Oysters Rockefeller diverges pretty far from the original, but that doesn't bother me because I've been making them this way for years and I love the way they taste. One of the greatest compliments I've ever received in my culinary career came from an old man who took the time to walk into the kitchen to tell me that he's tried all kinds of Oyster Rockefeller - including the originals at Antoine's - and mine were the best he's had. Blush. I guess you'll have to try this recipe and see for yourself.

Chef Wikipedia tells me that the original recipe doesn't actually contain any spinach - apparently it's mostly parsley along with some other herbs - but I like it with spinach, so there. As for the booze, Pernod is traditional (and delicious) but white wine works too if that's what you happen to already have on hand. There is also no cheese or bacon in Antoine's Oyster Rockefeller, but as I think I've made pretty clear by now, I'm not out to recreate the original. To some people cheese with seafood is a bit taboo, but trust me, the combination here of bacon, rich cheese sauce and oysters is pure luxury. 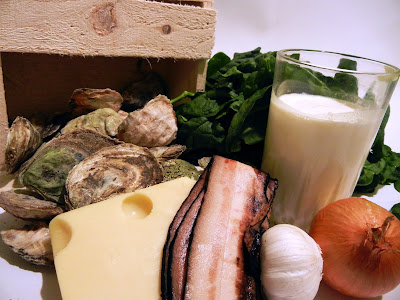 
1. To make the cheese sauce: melt 1tbs butter in a small sauce pan and then saute the onions until the are just translucent. Add the garlic and saute for one minute more. Deglaze with Pernod or white wine and let simmer until most of the liquid has evaporated. Add the cream and let simmer until reduced by 1/3. Add 25g grated Swiss cheese to the sauce, a bit a a time, whisking constantly. 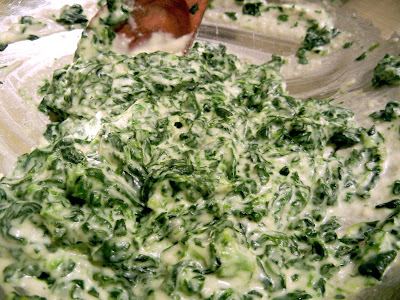 3. Carefully shuck the oysters & place the meat in a strainer. Wash the shells. Line a baking tray with coarse salt and set the washed shells in the salt, then return the oysters to their shells. Place a dollop of creamed spinach on each oyster, followed by a few bacon bits and a slice of Swiss cheese. 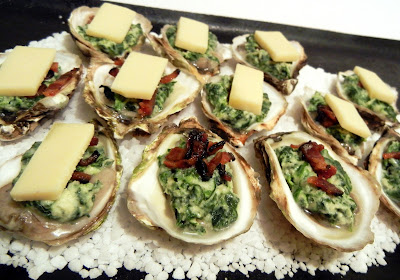 4. Place the oysters under a broiler until the cheese is melted and just starts to brown. Oysters Rockefeller can be made up to 3 hours ahead of time and kept in the fridge. Warm any Oysters Rockfeller that have been kept in the fridge in an oven pre-heated to 300F for 5 minutes before broiling to make sure the centers are hot. 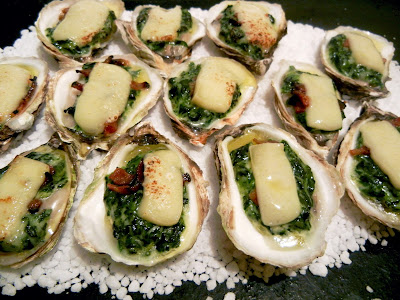