Lobster Themidor is a dish fit for a king. It's one of those rich, creamy French Classics that is just pure, unabashed opulence. You take a delicious, fatty lobster and smother it in creamy custard. Then, if that's not enough for you, you top it off with a layer of melted Brie or Gruyere cheese. Oh, la decandance!

Lobster Themidor was first made in Paris in 1894. It takes its name from a play about the French Revolution and the era in French history that followed, known affectionately as  "The Terror". I love the irony that such a luxurious dish was named in honour of one of history's greatest class struggles. Lucky for you, lobster is relatively cheap and plentiful during the summer, and you don't need a king's riches for the eggs, cream and brandy that round out this recipe.

What you will need is a bit of time to spare. While lobster is significantly cheaper during the summer, they stuff don't exactly give it away, so its worth taking the time to make something really wow with it. This is a fun recipe to try at home, because its one of those dishes that could easily cost you 45 bucks a plate in a restaurant, but you can recreate it at home for much less.

Making Lobster Thermidor is certainly a bit trickier that just making straight up boiled lobster, but with a little bit of care you should have no problem making something truly memorable. The key to success here is to get the cooking of the lobster bang on. What you will need to do is cook the lobsters as little as possible when you first boil them. You then add the lobster meat to the custard at the last minute and very gently finish the cooking, until the meat is soft and melting.

Warning: When you sneak a bite of that delicious lobster - poached in custard and drowning in rich, creamy cheese - you might feel the need to look over your shoulder to make sure there aren't any Revolutionaries coming to overthrow you. 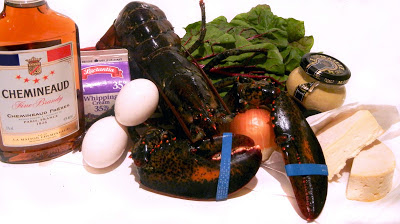 1. Bring a large pot of salted water to a boil and cook the lobsters for 8 minutes. Transfer the lobsters to a large bowl of ice water. Remove the meat from the shell. Wash the body and tail shell from 1 lobster and reserve in the fridge. The lobster meat should still be a little undercooked at this point. You will finish cooking the meat inside the custard.

2. Heat 2 tablespoons butter in a medium sized sauce pot and sautée the garlic and onions until they just start to turn translucent. Add the brandy simmer on medium-low until almost completely reduced. Careful as it might catch fire. Have a lid handy to put out the fire if it doesn't go out by itself after a minute.

3. Gently heat 1 cup of 35% cream in a small saucepan and add a 1/4 cup of hot cream to the onions and garlic. Whisk in the eggs yolk, followed by the remaining hot cream. Continue whisking over low heat until the custard is thick enough to coat the back of a spoon.

4. Add the lobster meat and 2 tablespoons dijon mustard, then gently simmer on low heat until the lobster is fully cooked, about 3 minutes. Add 1 tablespoon chives. 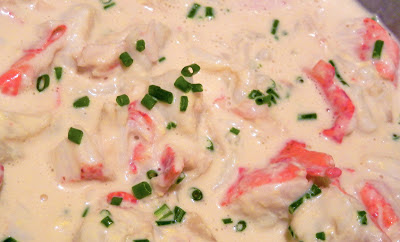 5. Spoon the lobster mix into the reserved lobster shell. I like to put all the meat from each lobster into just one half shell so that it looks extra heaping. Top each stuffed lobster with thin slices of brie cheese and then place under the broiler. Broil on high heat until the cheese is well browned.

6. Place the swiss chard in a large pot with 1 tablespoon butter and 2 tablespoons water. Cook on medium high until the leaves are wilted then season with salt & pepper. Strain the swish chard and then place a mound in the center on 2 plates. Place one lobster thermidor on each pile of swiss chard and then garnish with fresh chives.