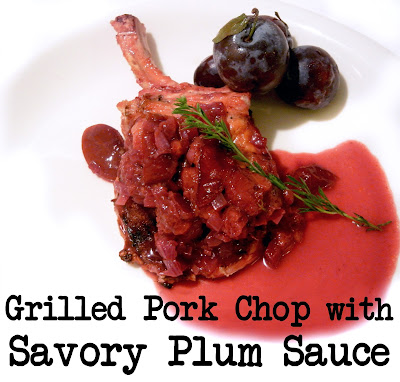 You can easily give your homemade plum sauce some Asian flair with soy sauce and ginger, but when I'm using fresh plums, I like to keep things minimalist so that they plums can shine on their own. I still like to play the flavours of  Chinese take-out, so I add some red wine vinegar and honey to make it a sort of sweet and sour sauce.  Sometimes I'll puree the sauce to get that sticky-sweet texture of Chinese plum sauce, but often just leave it chunky.

To get that really sticky constancy that some of the commercial varieties of plum sauce have, you can even add a little cornstarch. Take about 2 tablespoons of cornstarch and dissolve it in 3 tablespoons of cold water. Puree the plum sauce in a blender and add the cornstarch as it's blending. Bring the sauce back to a boil and let the sauce simmer while the cornstarch does its thing. Some professional chefs are vehemently opposed to cornstarch - as if it was a tool of the devil - but sometimes you just want that goopy, meat coating texture. And if you use fresh plums your sauce will be way better than any commercial brand anyway. So there.

My one embelishment in this recipe is to add some fresh savory. It's not really typical for plum sauce, but I just happened to have an excess in my garden and I knew it would go well with pork. Savory is close in flavour to both rosemary and oregano, so either herb would make a good substitute. You could also substitute the grilled pork chop with a pan seared tenderloin. For a side, I would recommend either mashed or fondant potatoes. 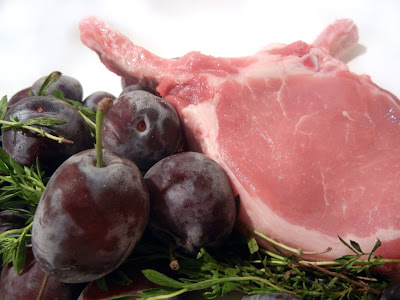 1. Halve the plums, remove the stones, then roughly chop the plums and place them in a small sauce pot. Add the honey, vinegar & savory, along with 1/2 cup water. Bring to a boil, reduce heat to medium and let simmer until the plums are very soft and most of the water if gone, about 15 minutes. 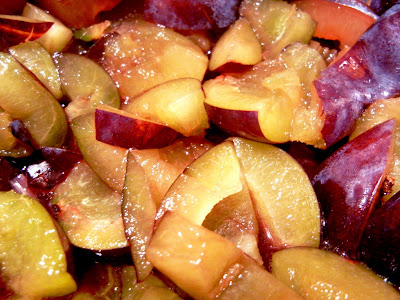 2. Heat the grill to high, and grill the pork chops on both sides until the meat reaches an internal temperate of 63C (145F)

3. Serve warm plum sauce over grilled pork chops with either  mashed or fondant potatoes.  Check the description above for instructions on making a smooth pureed plum sauce.