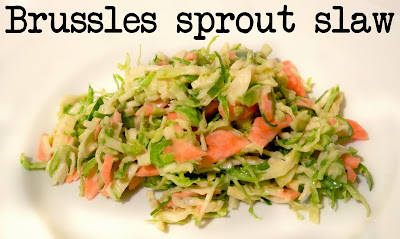 I was walking down the isles of the grocery store the other day and I saw the most amazing bunches of fresh brussels sprouts still in the stem. Around this time last year, I posted a recipe for sauteed brussles sprouts, so this year I decided to do something different. The bunch that I took home was so fresh and crisp I decided to try using them raw. Turned out to be a good idea: the resulting slaw was pretty freakin' amazing.

I love making coleslaw, and I've tried all sorts of variations (one of my favorites is apple & fennel.) What I love about this recipe is that after being tossed in mayo, the salad strays really crunchy, even the next day. You can use store bought mayo as the base for this recipe and just add a little lemon juice & mustard, but it's really not hard to make the mayo from scratch as I do here. 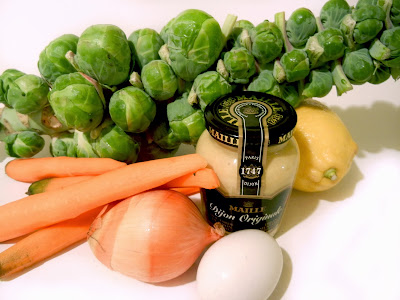 In a large mixing bowl, whisk together the egg yolk with the mustard & lemon juice. Add the vegetable oil in a slow steady stream, while whisking constantly.

Pro tip: To steady your mixing bowl, soak a kitchen towel in water and then set in down on your work surface in the form of a wreath. Set the mixing bowl down in the center of the wet-towel-wreath to steady the bowl as you whisk,