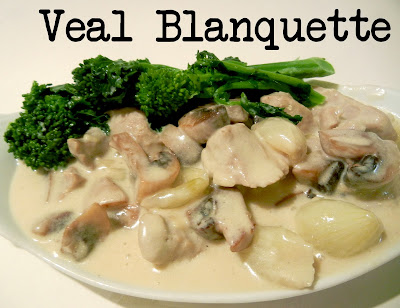 Veal Blanquette is yet another one of those old school French Classics that I just love. It`s warm and comforting, yet still classy and refined. Digging into a rich and creamy blanquette is the culinary equivalent of curling up on the sofa, crawling under a blanket with a nice Bordeaux and watching a classic movie that never gets old.

Like any good stew or braise, the key to success is having a perfect sauce that coats soft, succulent meat. The 3 primary ingredients in the sauce for blanquette are cream, white stock and beurre manié. When I make blaquette at the restaurant, I make my white stock using veal bones, but when I make it at home I often substitute store bought chicken stock. Obviously making fresh white veal stock is best, but when you`re only making a few portions, it`s not really worth the extra effort. The reason I use store bought chicken stock instead of veal is because most commercial beef or veal stocks are brown (roasted) and wouldn`t work in this recipe.

The other key ingredient, buerre manié, is a mixture of butter and flour, much like a roux. The buerre manié`s job is to thicken the sauce. Now, thickening sauces with flour is sometime looked down upon in professional kitchens as being out-dated. The new trend in professional kitchens for white sauces is to take `cooking` cream, which has already been thickened with additives anyway, and then thickening it further by reducing it. I personally hate this technique, because reducing cream just elevates its fat content and then the final sauce becomes much too heavy. Another objection to beurre manié might be that the flour contains gluten - the culinary boogie man du jour. While I`m all for cutting down on GMO wheat in your diet, which is in no doubt bad for you, the amount of gluten in the 2 tablespoons of flour on this recipe shouldn`t do too much damage. This is a special occasion, sunday dinner dish anyway, so just live a little, ok?

Once you have your sauce perfectly balanced - creamy & just thick enough to coat the meat, you are sure to wow anyone with this classic beauty. You can serve your blanquette with pretty much any accompaniment you like, the usual suspects being rice, potatoes or noodles. As for veggies, mushrooms & pearl onions are indespensible in a blanquette. Carrots are pretty traditional, but I like using rapini, because it`s bitter edge cuts nicely through the rich sauce. Brussels sprouts and patty pan squash are good choices too. The recipe can be made 1 day ahead, generally tastes even better the next day.

Whilst making this recipe, I suggest putting on some old episodes of anything by Jaques Pépin or Julia Child to play in the background. Bon Appitie! 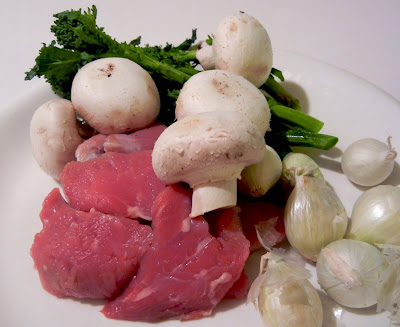 1. In a large pot, bring a large amount of water to a boil and then turn off the heat. Add the veal and let soak in the hot water for 2 minutes to purge the meat of any impurities. Strain and discard the water. Season the veal lightly with salt and then return it to the pot with the white wine, 3 cups white stock, bay leaves, fresh thyme, carrots & celery. Bring to a boil and then reduce to a simmer. Let simmer until the meat is tender, about 1 1/2 to 2 hours. 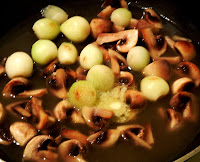 2. While the veal is simmering, prepare the mushrooms & onions. To peel the pearl onions, bring a pot of water to a boil and have a bowl of ice water ready. Put the onions in the boiling water and then after 30 seconds strain the onions and transfer them to the ice water. The skins should pop right off once they have been blanched. If he mushrooms are very small (1/2 or less), they can be left whole, otherwise cut them in quarters.

4. When the veal is cooked tender, stain and discard the carrot, celery, thyme and bay leaves. Set the meat aside while you make the sauce.

5. To prepare the buerre manié, heat the butter until it is soft, but not liquid (about 20 seconds on medium in the microwave) and mix in the 2 tablespoons of flour to form a paste. Add the buerre manié to the sauce a little at a time while whisking constantly. Let the sauce simmer until it is just thick enough to coat a spoon, about 5 to 10 more minutes. Season with salt & pepper.

6. Combine the finished sauce with the veal, mushrooms & onions. Serve with potatos, rice or noddles and steamed vegetables. 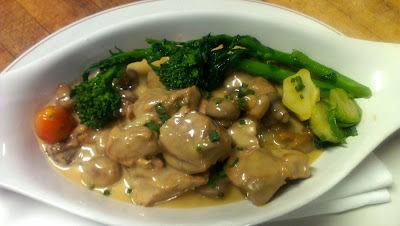