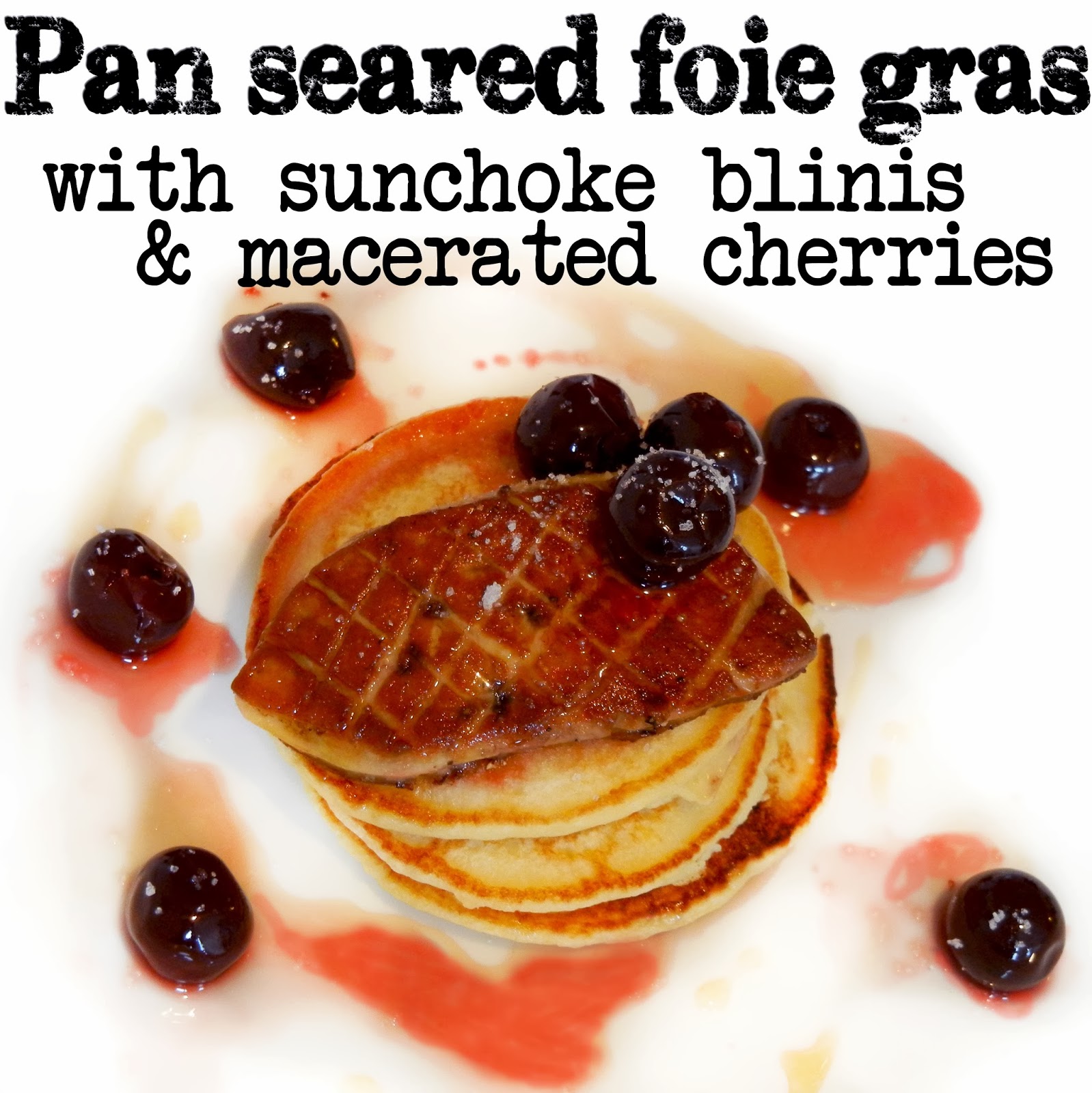 Valentine's Day is around the corner and it's time to bust out some fancy cooking to spoil the one you love. This dish is pure luxury, with silky, melting seared fois gras and boozy macerated cherries. The earthy notes of Jerusalem artichokes (i.e. sunchokes) enhance the flavour of the soft blinis (fancy pancakes) and a drop of pure maple syrup sweetens everything up.

Fois gras is a real luxury ingredient, one that you usually only seen in high-end restaurants and rarely in the home kitchen. It has a reputation of being hard to prepare, and that can certainly be true. Classic preparations like fois gras terrine or torchon involve a lot of steps and can be pretty tricky. Making seared fois gras is actually pretty quick and easy - but you still need to be careful because it's also easy to mess up and ruin a very expensive ingredient. Luckily, I will show you a fool-proof way to make seared fois gras at home for a fraction of the price you would pay at a fancy restaurant.

The biggest mistake you can make when working with fois gras is to overcook it. Overcooking is a sin when working with pretty much any beautiful, fresh ingredient, whether it's a well marbled rib steak or a spear of local asparagus, but it's a particularly grievous error when dealing with fois gras. What makes fois gras so succulent is all that luscious duck fat locked up inside. When mistreated, fois gras looses all that precious fat and will taste grainy and 'livery.' Not good.

The secret is to cook the fois gras from frozen. That way you can sear your frozen pieces of fois gras on high heat - giving them a beautiful golden crust without melting out all the fat. Simply finish the fois gras in the oven.  Cook them just long enough to warm through the interior and you will have that perfect, melting texture every time. Pre-portioned pieces of fois gras are available at some grocers and specialty store. These are perfect for this recipe, but if you can't find any pre-portioned fois, simply freeze the fois gras yourself in tightly wrapped individual portions and then take them out just before cooking. Use a warm sharp knife to score the fois gras before searing to help the seasoning penetrate. This recipe calls for 50g of fois gras per person, but feel free to double that amount if you are feeling generous. 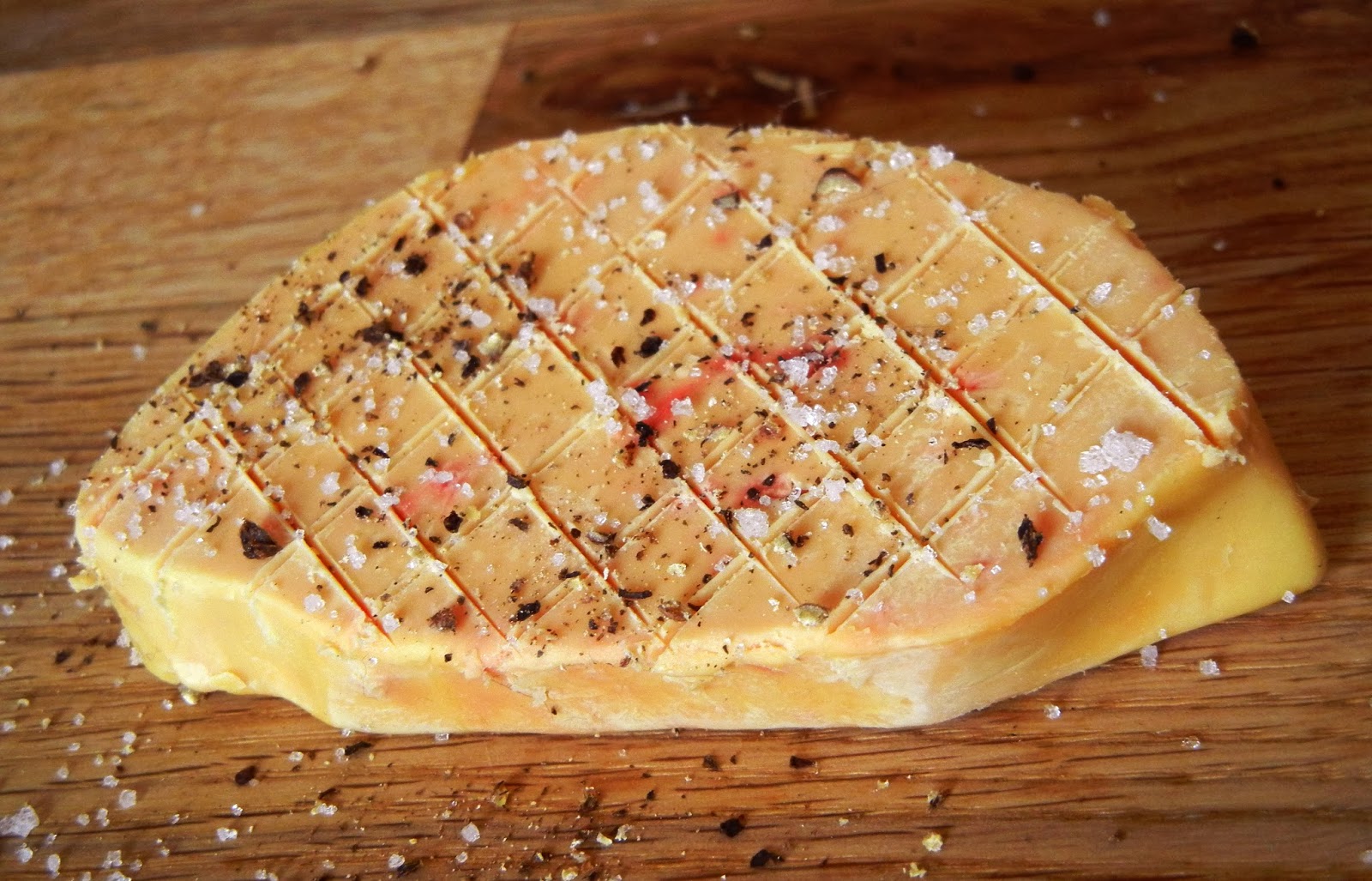 The blinis in this recipe are as easy to make as any pancakes, but the inclusion of some pureed jerusalem artichokes takes them to the next level. You could save some time and energy by just omiting the puree in this recipe and still have a pretty respectable dish, but fois gras is such a luxury ingredient that it's worth going the extra mile.

For the macerated cherries, you have lots of options. In the summer, when cherries are in season it is definitely worth getting fresh cherries and macerating them yourself for a couple of hours in sugar and alcohol. In the winter months, go for jarred cherries in light syrup - not the canned variety in heavy syrup.  Some specialty shops have great macerated cherries in liquor, but you can always just add the booze yourself. Kirsch is best, but brandy, sherry or even port wine work just as well. 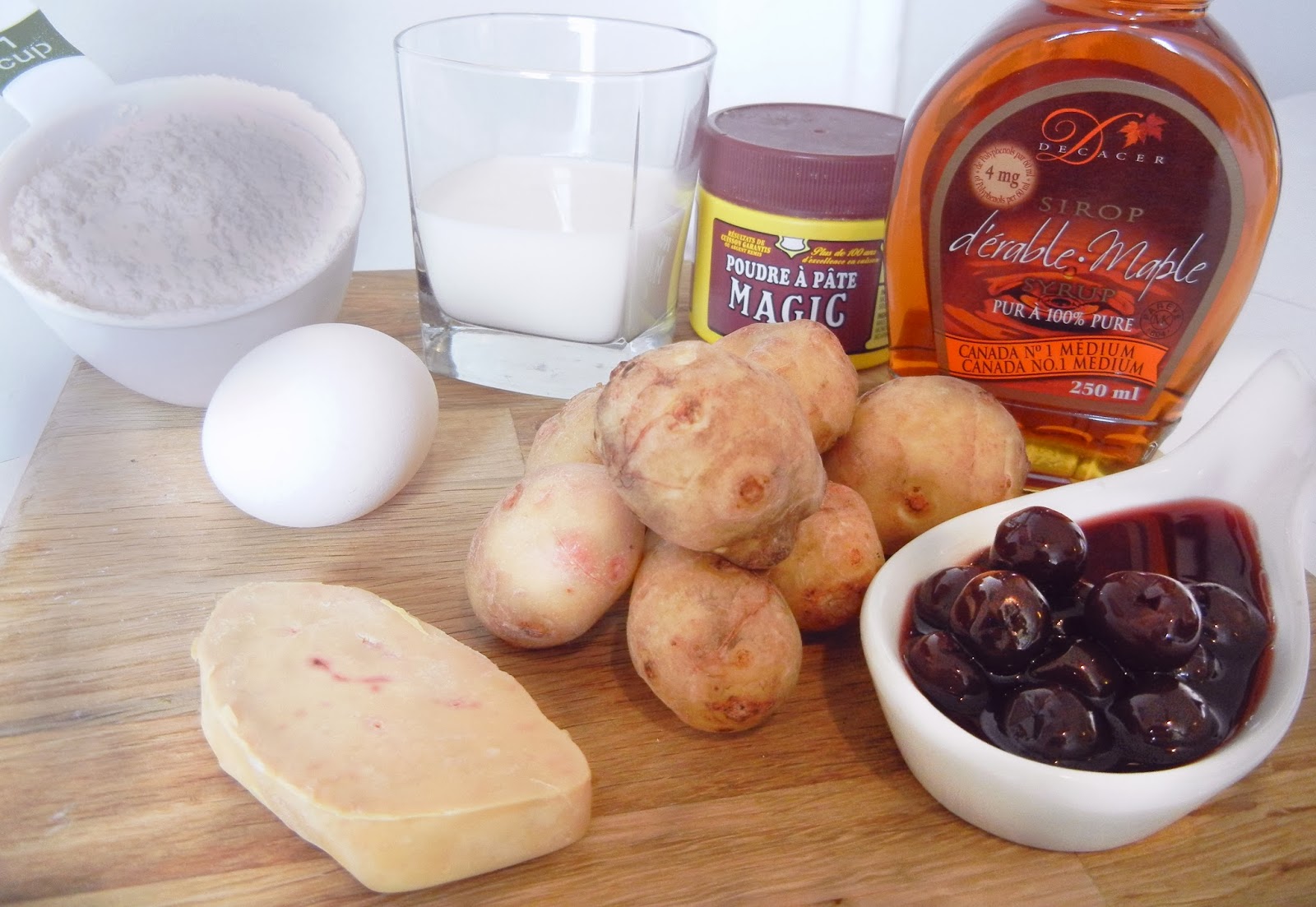 100g fois gras, cut into in 50g frozen portions
(go for 200g of fois gras if you want to double your pleasure)

2. Mix together the flour, baking powder and salt in the blini recipe and then make a well in the center. Add the egg and half the milk into the center of the well and stir in the flour. Add the rest of the milk while continuing to gently stir. Do not overwork the mix - small lumps are ok. Gently fold in the jerusalem artichokes puree. Let rest for at least 5 minutes to allow the baking powder to activate.

3. Heat 1 tablespoon of butter in a non-stick pan and use a laddle or measuring cup to pour the batter in 4 cm (1.5 inch) circles. Cook on medium heat until browned (about 2-3 minutes) then flip and brown on the other side. Tranfer blinis to paper towels to drain off excess oil.

4. Heat a frying pan on medium-high heat. Generously season the fois gras with salt & pepper. Place in the hot pan and gently press down on the fois to ensure even contact with the pan. When browned on one side (about 1 minute) flip, brown on the other side and then transfer to paper towel, with the blinis. Heat in the oven at 350F until fois gras is soft to the touch, between 3 - 6 minutes depending on the thickness of the slices.

5. To dress: place a pile of 3 blinis at the center of each plate. Place seared fois gras on top of each stack of blinis and garnish with cherries and maple syrup. 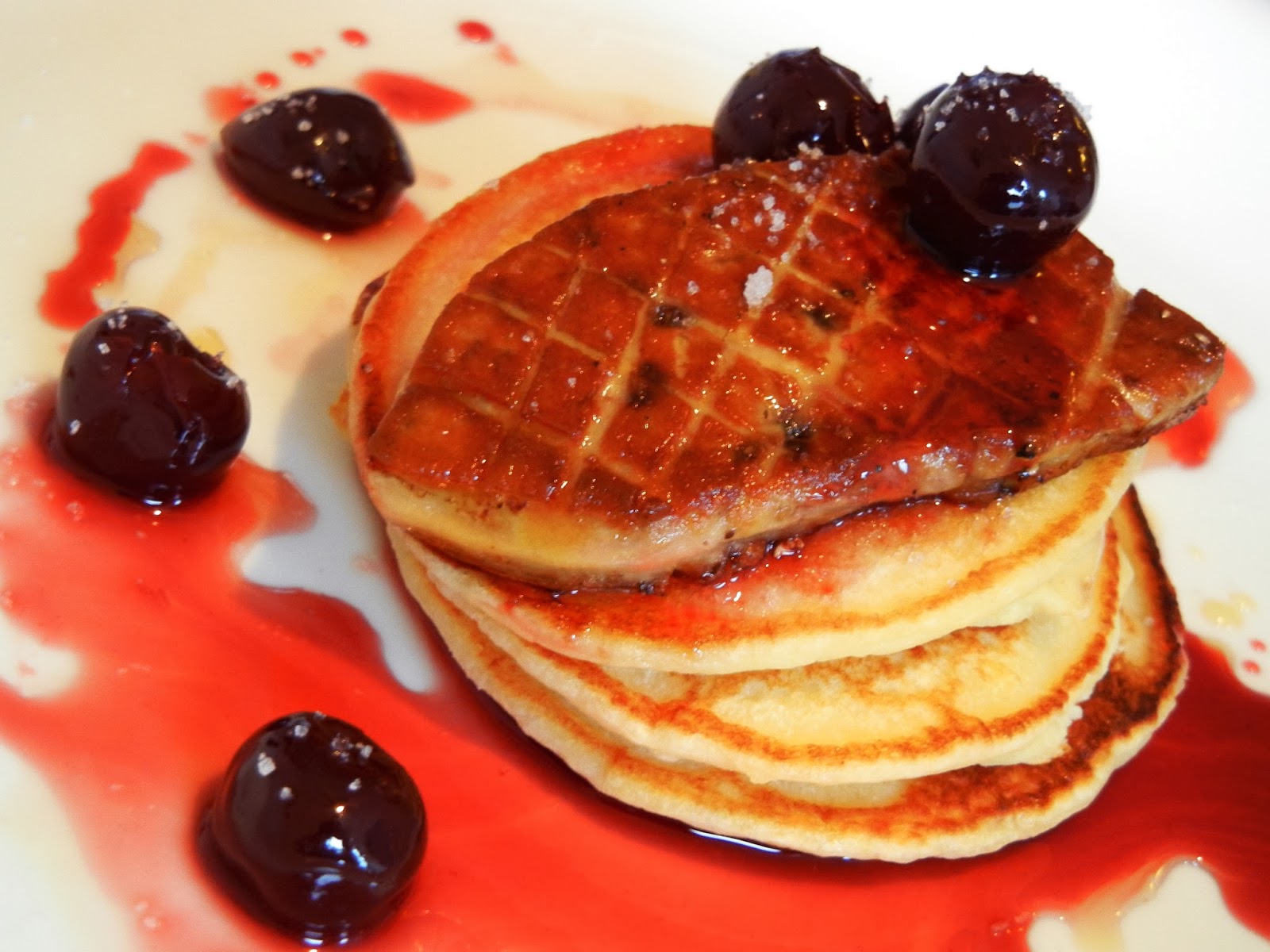